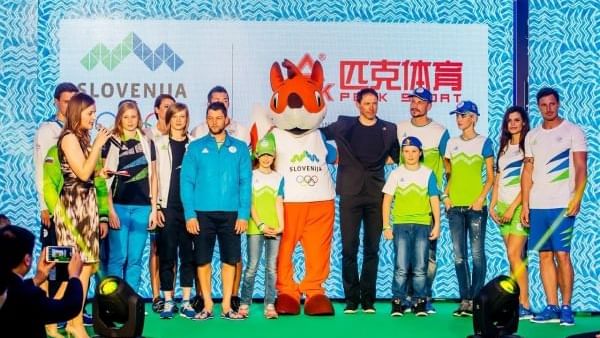 Collection for the Slovenian Olympians presented at Hotel Lev

On Friday, 15 April 2016, the Slovenian Olympic family presented before the eyes of Dr. Thomas Bach, President of the International Olympic Committee, the collections for the August Rio Olympic Games at a fashion show held in Ljubljana, in hotel Lev. In February at the Lillehammer 2016 Winter Youth Olympic Games the President of the International Olympic Committee was looking forward to his next visit of Slovenia and praised the Slovenian athletes: “I await the visit with great satisfaction, as well as my return to Slovenia. It will not be the first time that I will visit this country and with this visit I wish to express my admiration for the great success of the Slovenian athletes. If you look at the population and the number of medals won by Slovenia, the country is definitely one of the driving forces of the Olympic sport.” Union Hotels as a proud sponsor of the Olympic Committee of Slovenia happily hosted and accommodated dr. Thomas Bach in Grand Hotel Union. The reason for his visit to Ljubljana was the invitation of the Slovenian Olympic Committee and the fashion show that for the first time ever revealed the collection for the Slovenian Olympians attending this year’s Summer Olympics in Rio de Janeiro, Brazil. Models as well as Slovenian athletes (Luka Božič, Maja Mihalinec, Rok Drakšič, Tina Šutej,…) walked the catwalk set up in hotel Lev at the Karantanija Hall perfect for events up to 500 guests. During the show the Olympic Committee of Slovenia presented to guests and media the national kit, leisure wear and ceremonial clothing all designed by Sandi Murovec and made by Chinese manufacturer Peak. The colours of the Slovenian Olympic team at the Olympic Games in Rio will be white, blue, black and green. The fashion show was followed by a press conference of the President of the International Olympic Committee, who was then welcomed by the Prime Minister of the Republic of Slovenia, Dr. Miro Cerar.