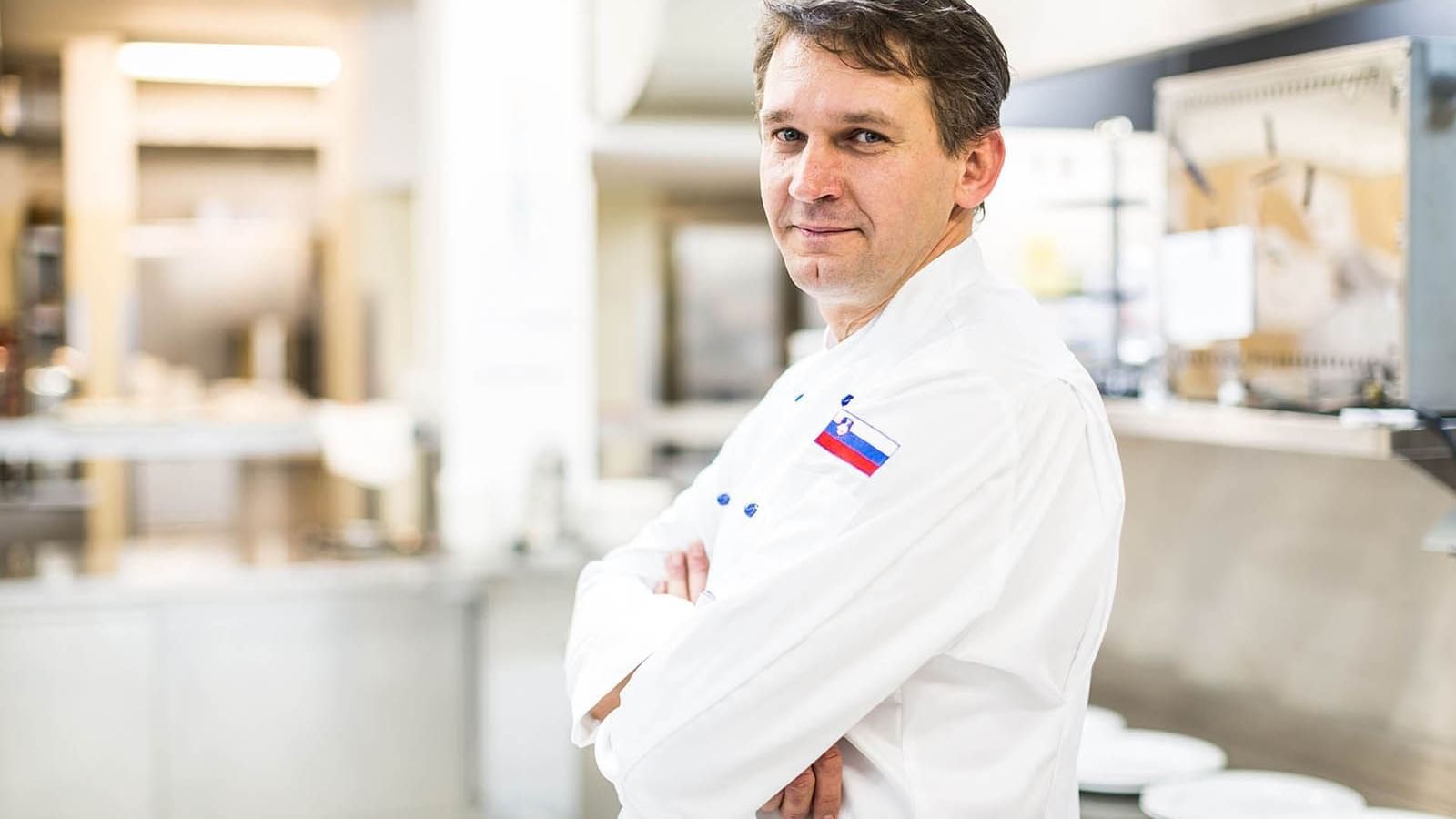 Get to Know the New (Old) Chef of Grand Hotel Union

Grand Hotel Union's restaurant welcomed back its new (old) master chef, Janez Dolšak, who returned to the restaurant after a two-year break. The chef de cuisine from the Slovenian region of Dolenjska has been a regular in the kitchen of Ljubljana's oldest hotel since his secondary-school days, and is now returning to a well-known environment with new ideas and approaches heralding a breath of fresh air to the range of culinary delights offered at the restaurant.

Some chefs say their cooking careers started in the kitchens of their grandmothers, mothers, aunts ... Was this the case for you too?

Janez: Even as a young boy, I loved tasting things. I ended up sticking my fingers in jams in our home's pantry. And the best thing of all was my mum making potica (translator's note: traditional Slovenian roll cake with various kinds of fillings). The best part is the filling, of course, but the one that's already been spread on the dough (laughter). So I can say I've always been interested in what's going on in the kitchen.

And after? How did your professional career start?

Janez: It all started after primary school. At the time, I didn't even know that there was such thing as being a chef by profession. In fact, until then I'd only known 'the food service worker' profession. Back then, most of the boys from rural areas, where I grew up myself, usually had some sort of technical profession, such as a machine operator or an electrician. And so the plan was to enrol at the secondary school of mechanical engineering, because I also enjoy working with wood and metal...

So you're an all-round creative person?

Janez: That's right. Well, back then, me and my sister both went to enrol at the secondary school of mechanical engineering. I don't remember exactly what happened and why, but I do know that on that day instead of enrolling at the mechanical engineering school, I ended up enrolling at a cooking school. The first person to suggest this was my sister.

Is she still a fan of your culinary treats?

Janez: Yes, I think so (laughter). Even today she still loves to point out that it was her who ‘cooked it all up’. Well, when we returned home, our father asked whether we'd enrolled. I told him I'd enrolled at the cooking school, but the only thing he asked was whether this was even a profession.

These days, this is hard to imagine.

Janez: When my grandmother was a young girl, she trained to be a food service worker in Vienna. At that time, there was no such thing as a cooking school, but they nevertheless all did it. Where my mum is from, we had an inn up until the war, and I may have inherited some of the cooking skills.

So your family has a long tradition of innkeeping?

Janez: Yes, we had a coaching inn – it was located by the road leading to the coastal region, where there was always a lot of transit of timber and woodenware from Ribnica and Kočevje.

Do you think the cuisine from the region gave the character to your cooking?

Janez: I can't really say I'm focused on anything particular, I'm not. I love cooking, I love preparing food made to old recipes, dishes from the past, and present them in a new form. I want to make food that is appealing both to the eyes and in the way it tastes.

Which is also an excellent match for the story of Grand Hotel Union, which has been here for more than a century, but is nevertheless doing a very good job keeping in step with the times.

I started off as an apprentice at school, then I served an apprenticeship here, and later I was the restaurant's master chef for 17 years – until 2015. Well, now I’ve been invited back to co-create a story that we started years ago. Of course, I am very happy and excited about this, because Grand Hotel Union is the hotel I grew up with.

What would you say our guests can expect from your cuisine now?

Janez: In recent years, I've been busy gaining lots of experience, taking a step back to see things clearly... I think I can now offer even more. I've learnt new skills, because in the world of culinary arts things change very quickly, and in the future, guests can expect a lot of creative dishes.

Maybe you can hint at what we can look forward to?

Janez: We prepare local food, both vegetables and meat. We follow the seasons, use our imagination and apply the principles of modern cuisine.

And at Restaurant Union, all the conditions for this have been fulfilled, since we have our vegetable patches, local meat suppliers, etc. Janez: That's right. This means more than anything else, since good ingredients are important for a good finished product. And delicious finished products – tasty plates brimful of seasonal culinary delights and imagination, created by Janez and his team – can be enjoyed in the Restaurant Union. Come and visit us – wlcome!